Recession – there’s been speculation for some time now regarding when to expect the next prolonged downturn in the financial markets. Yield curves in Canada and the U.S. are inverted with short-term interest rates being higher than long-term interest rates, which is often considered a recession precursor. Canadian and U.S. equity markets are currently at all-time highs which is often characteristic of market conditions prior to a recession. Also shaping expectations is the spectre of an all-out trade war, reducing global economic growth, and potentially sparking the beginnings of recessionary conditions. Many are wondering how they should be positioning their investment portfolios given these circumstances.

What is a Recession?

In thinking about a recession and what it could mean for financial markets and your portfolio, it’s important to first ensure a common understanding of what a recession is. Based on the accepted technical definition, a recession typically occurs when two or more successive quarters (six months) show a drop in gross domestic product (“GDP”). 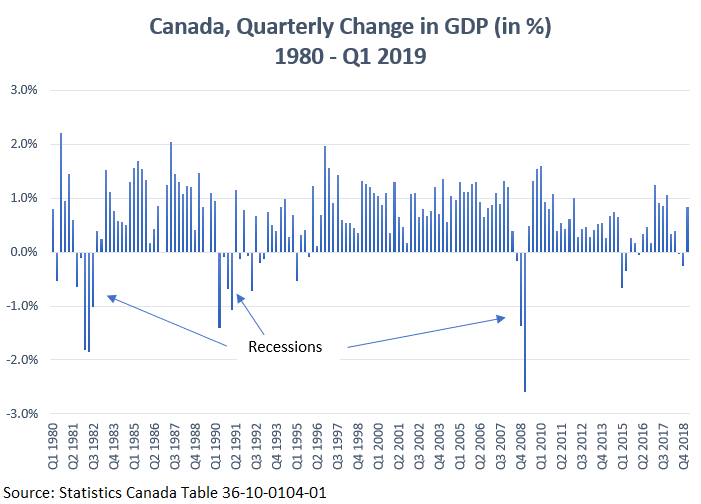 From the graph above, the three most recent recessions took place in 1981, 1990, and 2008. There was a technical recession in 2015 based on the GDP definition, but it was not of the same magnitude. The following table gives you a sense of how equity markets fared during major recessionary time periods.

In fact, it wasn’t until late 2000 that the Bank of Canada introduced the system of fixed interest rate announcement dates that we know today.

Given the “recent” Bank of Canada strategy to actively use monetary policy to manage economic conditions, the 2008 recession is the only relevant time period where we can learn from the actions of central banks during recessionary times.

Does this mean it’s all up to the central banks to insulate the markets from the next recession? While the central banks can certainly soften the blow, recessionary conditions are a natural part of the business cycle. As defined in the Canadian Encyclopedia:

“A recession is a temporary period of time when the overall economy declines; it is an expected part of the business cycle. This period usually includes declines in industrial and agricultural production, trade, incomes, stock markets, consumer spending, and levels of employment.”

Perhaps this simpler definition makes more sense than analyzing quarterly GDP changes when thinking about overall portfolio impacts. Key language underlined in the definition are that recessions are temporary and an expected part of the natural business cycle. Recessions can be stressful from a personal and financial perspective. However, history shows that recessions can end soon after they were confirmed. But they do end. It’s important not to lose sight of this, no matter how challenging things may be, which is easier said than done for all of us.

The other reality is that recessions are only confirmed by data well after they occur, which means there isn’t much to be done about them beforehand.

Given the realities of business cycles, you should not be making dramatic changes to your investment portfolio in anticipation of, or in reaction to, recessionary conditions. Your best course of action is to stay the course in your long-term financial plan and rebalance your portfolio back to intended targets in a systematic manner.
Below is a sense of how markets have fared since the 2008 recession. Despite the large negative returns experienced in 2008, on a total return basis, markets have more than made up for the last recession’s declines. 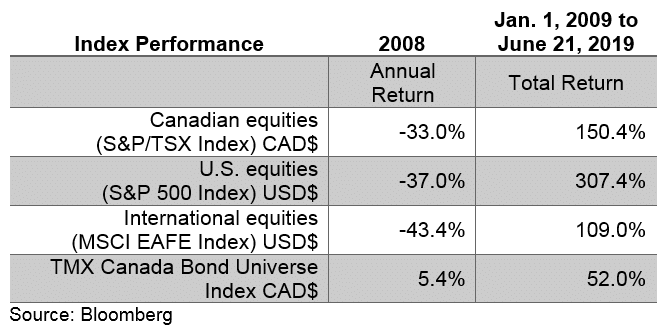 “More money has been lost trying to anticipate and protect from corrections than actually in them.”

Volatility and periods of negative returns are a fact of life in the capital markets, and due to the higher risk premium associated with equities, stocks will exhibit a higher level of volatility than fixed income and cash. Over longer time periods, however, equities will also offer a higher average level of return in compensation for the increased volatility.

Trying to predict the timing of the next recession is more often than not a futile exercise. It will come at some point in time. And it will pass. Currently, the market is hyper sensitive to recessionary signals given current global trade war tensions. In times like this, it is important that investors remain calm and understand that long term investment portfolios are designed to weather turbulent times which allows you to filter out the noise.

Quadrant Private Wealth is an independent, comprehensive, integrated wealth management firm committed to your financial well-being and peace of mind. We take the time to understand your complete financial picture. We tie all of your information together, including tax planning, to paint a picture of what your financial future could look like. And we aim to earn your complete confidence in the process.